5 days to the DESERT from MARRAKECH 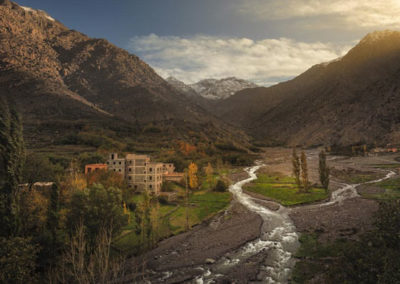 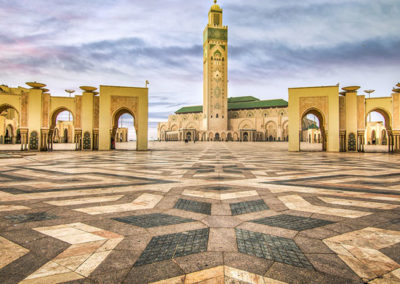 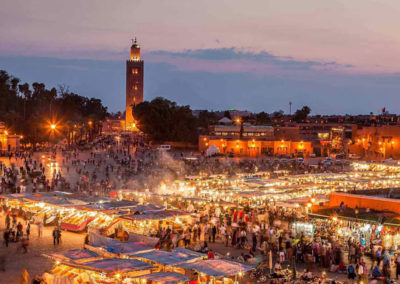 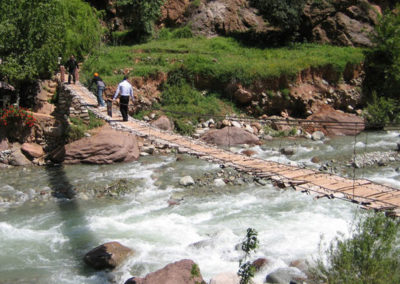 Day 1: FROM MARRAKECH TO AIT BEN HADDOU KASBAH VIA THE ATLAS MOUNTAINS THEN TO OUARZAZATE AND TO DADES GORGES:

Our wonderful journey starts from your accommodation in Marrakech, for a tour around some of Morocco’s special destinations, and the first one for today will be the Kasbah of Ait Ban Haddou, on the way you are going to experience the beauty of Atlas Mountains via the road of Tizi-n-Tichka, the highest road in Morocco with an altitude of 2260m, offering you charming views as far as the eye can see , valleys, oasis, mountains, and Berber villages. We will have stops along the way, so you can get the chance to take some great pictures, and to admire the beauty of this area dotted with tiny berberic villages.
Arriving to a world Heritage site the Kasbah of Ait ben Haddou, this place belongs to one of the most important families between the 16th and 17 th century in Morocco, “the Glaoui’s family” ; and a place that attracted many film makers, that took a part in their movies such as ” Jesus of Nazareth “. A lunch is planned for you to enjoy it in this historical area. After a quiet stay, we will resume our tour in Ouarzazate, to explore one of the historical Kasbahs in the area, the Kasbah of Taourirt ; Next we will visit the city of roses, and its valley, a carpet of roses as far as the eye can see.
Eventually, arriving to Boumalene Dades, where you will enjoy a traditional dinner, and spend the night at a Riad/hotel.

After breakfast at the beautiful town of Boumalene, we will head over to a special destination today, the magnificent Merzouga, passing by Tinghir, to visit Todra gorges the highest narrowest spectacular gorges in Morocco, a unique place, recognized around the world as one of the most spectacular Canyons in the world. After a quiet stay we will continue to the famous town of Tijdad, where you will try a traditional lunch. After restoring, we will continue towards our unique destination passing by Errfoud; then to Merzouga, where you will be welcomed by camels that will take you through the magnificent world of the sandy dunes of Erg Chebbi. In a memorable experience on the top of the camels you will admire the spectacular sunset in the Middle of the Sahara.

Eventually, the camels will take you to our traditional well equipped camp, where you will enjoy a traditional dinner, while listening to a berber music show, in a friendly mood under the stars.

Overnight in a nomadic camp.

In today’s program after breakfast, we will pick you from the camp to, explore the surrounding areas of the marvel Erg Echebb desert by visiting the village of khamlia inhabited by black-skinned musicians people, to enjoy folk dances, and black Gnaoui music, following by the spectacular lake of Merzouga with its rich birds species, also visita nomadic house, where you can see some Berber handicrafts, and learn more about their way of living. In the afternoon we will ride the camels back into the golden dunes to enjoy sunset in the middle of Sahara, to conclude the day by a traditional dinner in the camp while enjoying berber music.
Overnight in a nomadic camp.

After a calm relaxing night, it is recommended to wake up early so you cannot miss as spectacular sunrise in the desert. Take a shower and enjoy a traditional breakfast, then return by camels to the village of Merzouga. Then we head to Rissani, an old imperial city, where you will visit the largest and the traditionalist market (Souk) in the Southern Morocco. then to Anif. We continue towards the gate of the desert, the city of Ouarzazate, via Tazarine and, the beautiful town of Nkob, where you will enjoy a traditional lunch among local people. Before continuing, on the way we will pass by the magnificent Draa Valley.
Eventually, when arrivin to Ouarzazate, where you will enjoy dinner, and  spend the night at a Riad.

After a traditional breakfast, we are going to explore Ouarzazate the city that attracted with its unique landscapes many producers to give it a part in the film, with its biggest film studios in Morocco. And of course the famous kasbah of taourit.
Afterwards, you are going to experience the beauty of Atlas Mountains via the road of Tizi-n-Tichka the highest road in Morocco with an altitude of 2260m, offering you charming views as far as the eye can admire, valleys, oasis, mountains, and Berber villages.
Eventually, arriving to the red city “Marrakech”, where unfortunately our unforgettable experience will end.