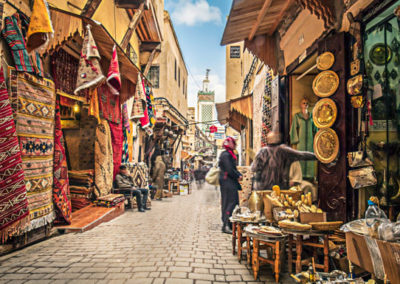 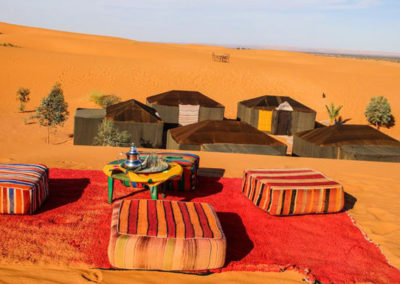 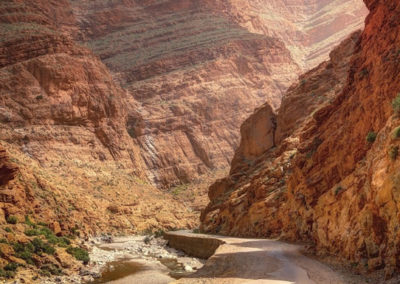 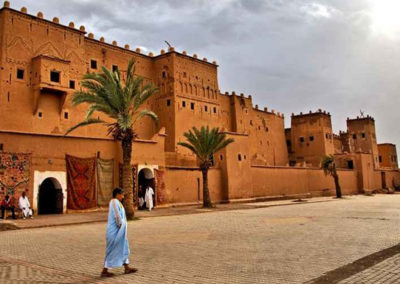 After you enjoy your breakfast, we will pick you up from your hotel or riad then head south to Ifrane and Azrou through the Middle Atlas Mountains. On the way we will stop on the cedar forests located near Azrou to see the monkeys and enjoy the landscape, Then we will travel through the Middle Atlas Mountains pass to Midelt where we will have lunch break, then hit the road again to reach the beautiful Ziz Gorge – a gorge carved into volcanic rocks. There we will stop for photos on the way to the Ziz valley, before reaching the desert, where you will find your camels waiting for you to cross the dunes and enjoy the unique desert sunset . We spend the night in the middle of the dunes, enjoying dinner around campfire, while listening to some Berber music.

We stay the night in desert camp under Nomad tents.

In today’s program after breakfast, we will pick you from the camp to, explore the surrounding areas of the marvel Erg Echebb desert by visiting the village of khamlia inhabited by black-skinned musicians people, to enjoy folk dances, and black Gnaoui music, following by the spectacular lake of Merzouga with its rich birds species, also visita nomadic house, where you can see some Berber handicrafts, and learn more about their way of living. In the afternoon we will ride the camels back into the golden dunes to enjoy sunset in the middle of Sahara, to conclude the day by a traditional dinner in the camp while enjoying berber music.
Overnight in a nomadic camp.

In the morning, before breakfast, it’s recommended to wake-up early so you cannot miss the spectacular sunrise of Merzouga in the middle of the Sahara. Take a relaxing shower, and breakfast. Afterwards we are going to ride camels back to the village of Merzouga, then drive to Rissani and Erfoud, before resuming our tour towards todgha gorge, one of the most spectacular canyons around the world passing by the beautiful Ziz Valley, in todgha you will have the opportunity to walk among local people to enjoy todgha’s Beauty.
Overnight in a hotel.

In the morning, after breakfast we are going to drive via the rose valley of Magouna, then to Skoura and many other Berber villages.
Eventually, arriving at Ouarzazate also known as “African Hollywood”, passing through the enjoyable thousand Kasbahs passing by tiny Berber villages where you can take some great pictures.
Overnight and dinner at a hotel in Ouarzazate.

After a traditional breakfast, we are going to explore Ouarzazate, the city that attracted with its unique landscapes many producers to give it a part in the film, with its biggest film studios in Morocco.
Next you are going to head out to explore the famous Kasbah of Ait-Ben-Haddou, a world Heritage site, which was a part of many universal films such as “Gladiator” .
Afterwards, you are going to experience the beauty of the Atlas mountains via the road of Tizi-n-Tichka, the highest road in Morocco with an altitude of 2260m, offering you charming views as far as the eye can admire, valleys, oasis, mountains, and Berber villages.
Eventually, arriving to the red city “Marrakech” Drop off at your accomodation in Marrakech.

✓  Sleeping in the desert camp .

✗  Plane ticket to and from Morocco .